This week two notable releases were announced. Both were releases that I played a part in. Of course, I'm absolutely proud beyond belief when these projects are announced by media. These are situations I never could have invented for myself, yet I'm finding myself involved in the process of creating these pieces.

1. Bill Nace and Kim Gordon's Body/Head record, Coming Apart, is coming out on Matador. Read about it here. I'd worked with them in the past, and have written about it. This record will draw you in. It's beautiful, intense, and truly a masterpiece.

2. The Pixies released Bagboy. Black Francis and a friend came in last summer, nearly one year ago, to work on demos for "the old band's new record" -- and this song was one (of 9) that we spent a lot of time on. We tried different drum beats, edits, tempos, guitar tracks, etc.. What we came up with was not a far cry from what has been released, and a lot of what we recorded was used in the final mix.

So.. like I said.. I'm very proud to have been a part of these projects.. But it's funny because when we're actually working in the studio, I don't have these feelings.. the need to pinch myself, or any of that. I am working. My priority is to accomplish the goals the artist has set for the time we have together in the studio, and to make sure he or she is comfortable in doing these pursuits. It's really that simple. This is the case with every client and every project I work on.

Mostly, I'm proud to have a career doing something that I love. It's very gratifying to wake up and read an article about a record that I helped make. Sometimes it makes my dream job a reality.

Here are some other artists that are about to or just have released their most recent recordings:

Bring it to Bear - Too Many Books out now

Aye Nako - Unleash Yourself - out now

Bunny's A Swine - Calling Out - out now

These are all high quality works and I recommend improving your summer road trips by buying all four of them!
Posted by justin at 8:03 AM No comments:

I just got back from a long overdue trip out to Foxboro, MA to visit Joe Pires and Mercenary Audio. You can go to their website and look at once was.. but you can no longer buy anything from them. Sadly their day is done. Most people in field of audio engineering have probably purchased a piece of two from Mercenary, and if you haven't I'm sure you wanted to! I got to know Joe through Woolly Mammoth Sound. I've managed to get him to western Mass a few times over the years to tend to some matters at Bank Row and Bisquiteen. Good people, good resources.


Sonelab celebrated our 1 year anniversary in May. It's been a fantastic year and we're very glad to be here, offering our services to the local community and beyond. We decided to host a huge party and invite all of our clients, friends, and family. The day went by quickly (as about 100 people passed through our doors) but luckily, Julia was able to snap some pics of the antics.


Anyway.. back to some gear and rock-talk!

The reason I went to Mercenary was to pick up a pair of Urei 509 EQs. They were originally console modules. They were sold to Electrical Audio, racked, powered, modded (John Hardy 990 opamps are the make-up gain), and somehow ended up back at Mercenary. Now they're at Sonelab, racked in a beautiful Electrical Audio rack. I've already used them to add BITE to lead guitar tracks.. Here they are:

As I was saying, I went to Mercenary to pick up said EQs - I ended up loading up my car with a bunch of other shit that I'm ecstatic to own! The thing I'm most psyched about is this RCA mic stand. They certainly don't make them like they used to:

Other items picked up and added to Sonelab's gearlist: Demeter Tube Di (love these things!), a single Auratone for mono reference, and Neve 1260 line amp with Ives microphone transformers on the input making them KICKASS Neve germanium mic preamps.

Brooklyn's Aye Nako's new LP is OUT! We recorded this in late autumn 2012. They totally rule.. so check it out.. oh and they gave me the absolute sweetest credit I've ever gotten: 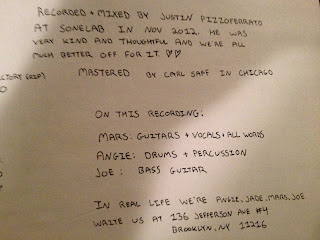 Bunny's A Swine's new record has been through mastering, test presses- the whole 9 yards. They're awaiting the final test press, the actual pressing, and it's OUT. The cover art is done, and it's ready. "Calling Out" is a fine, fine record.

Violet Clark of Grand Dutchy fame game in to record a BUNCH of stuff for her new EP. For the first time, I was able to mix a bunch of it. It was a ton of fun! Some of it should be trickling out soon.

Pineapples came in to finish tracking and then to mix their forthcoming EP. The songs have been previously recorded, but not all released. The band decided they wanted to get back together to recut their songs. It's got a great range of really heavy Sabbathy moments to straight pop-rock with 12-string guitar hooks. I love it!

The big one in May was Doug Ratner and the Watchmen. We (the band, the producer Ben Jon, and myself) really buckled down and hammered this one out. We spent 5 days getting basics, edits, punch-ins, and rhythm guitar tracks done. The record was demoed and rehearsed with their producer before hitting the studio, but even still, some of the songs took turns that weren't exactly planned. It was a lot of fun to see this happen, after listening to the demos. There was no shortage of awesome sounds to go around. I took some snaps of the bass rig because it was freaking AWESOME sounding!


At the end of May, I made a visit to ol' Bisquiteen to work with the infamous Warblers! We had two days in a row - we totally rocked it, out meeting and exceeding our goals! It's raw, garagy, and LOUD. More fuzz!!


June is here and it's rocking.

Lord Jeff came in to finish their forthcoming record. Cut vocals, comped leads, and mixed. The record sounds REALLY good and the songs are fantastic!

Bill Nace and Paul Flarety came in to mix a new record they recorded as a quintet with Chris Corsano, Dredd Foole, and another sax player, who's name I don't know (sorry!). It was recorded at a studio in Hadley and brought to Sonelab for mixing. It's full on, HEAVY improv. Blistering, even!

Dave Sweetapple came in to mix a single for his new project Skaeling Blod, featuring Terri Christopher on drums, Gurtle Kjellson providing vocals and moog synthesizer, and Tim Lehigh on electric guitar. The song was recorded at Bisquiteen just over a year ago, during the tracking of Dinosaur Jr's I Bet on Sky record. Dave and Terri snuck in for a short 4 hour session to grab the basics. Since then, the tracks have literally flown around the world and came back here for mixing. We're going through revisions at the moment but it's damn close and it's goddamn heavy!

One of the things I'm most excited about, is to be a part of the Potluck Audio Convention in Tuscon, Arizona. I'll be speaking on a panel dedicated to vocal recording. Often times, it's the most important part of a mix. It'll be great to get into the detail of it with a panel of engineers who's experiences vary quite a bit. We will all learn a thing or two, for sure! If you're considering attending this event, I suggest it. Though I've never been to one, I hear it's always a blast!

I have plenty of openings in July and August. If you're looking for last minute studio time, please reach out.

Enjoy spring. See you 'round.
Posted by justin at 5:35 AM No comments: