It's been a long time since I've updated this blog, therefor I have a ton to report! Let's dig in, chronological-like..

First, I'd like to update everyone on the goings on within my new studio space. I'm proud to say that we're in the home stretch! There's paint on the walls, floor, electricity pumpin, and we're beginning the finishing touches: doors, floors, etc!

I can't even describe how excited I am to start recording in this space. As doors and such have gone up, Mark and I have been able to witness not only the rooms taking shape, but the SOUND of the rooms evolve. I think they're sounding better and better with every door that goes in.

Here's a shot of our live room, standing in front of Mark's control room: 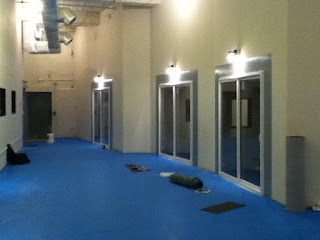 The first sliding door on the right is what I refer to as the '70s drum room.' It's large enough to record a drum set. There's carpet on the floor and a drop ceiling. This makes for a very nice, thuddy sound. There are no right angles or parallel walls so It's very clean-sounding, too!

The second sliding door down is our small dead room. Perfect for a bass rig or guitar amps.. Or if you're looking for a very quiet room to record your most intimate vocal take in. Also carpeted and with a drop-ceiling.

Third room down is the drum-iso room. It's massive with full 16' ceilings. Bonham would be psyched! Here's a picture of the drum room: 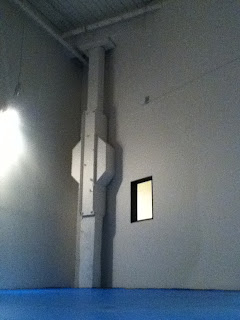 Note the window opening. This window will provide line of site through all three iso rooms.

I'm actively starting to book for April 1st, 2012! If you're interested in a tour, more information regarding the studio, or straight up want to book some time, please reach out.

2012 started out with a bang. The first session I did was with Elder. We tracked in mixed 2 songs in 2 days over at Black Coffee Sound. The recording is to be released on an 12" for Armageddon Records in Providence, RI for a Record Store Day release! Holy heavy! This might be one of the heaviest recordings I've ever been a part of. Big drums and big amps were the theme of the session!

Amherst's Californiax came into Black Coffee Sound to track 2 songs for their new single on The Sounds of Sweet Nothing, a UK based label. These dudes are somewhat new, as this was their first studio effort. We not only had a great time, but made some damn-fine recordings in a day's worth of time! We're hoping to hit the studio again in the not-too-distant future to work through a full length!

Boston's Banditas and I continued work on their forthcoming full length. We took a field trip out to 1867 Recording Studio in Chelsea, MA to cut vocals. The record really took shape with finished vocals! The band is now scheduled to mix this record next week.

J Mascis just completed mixing and approved mastering on his forthcoming solo effort. It's under the name Heavy Blanket and will no doubt, turn heads. I'm not going to say anything else about it. Get psyched for a May release!

Back in January, I teamed up with Rusty Belle to make a live recording. We set up a stage area, brought in many microphones, preamps, and my Pro Tools rig. The goal was to capture Rusty Belle's live set in front of an audience and we most certainly met that goal. The shows spanned 2 nights and were fully-documented. The recordings came out crisp and clean with a healthy dose of bleed from all of the instruments and lack of isolation. What made it work so perfectly is Rusty Belle's ability to play to any room that they're in. They did so, perfectly! We're set to mix this soon!

Speaking of mobile sessions, I brought the rig into Kim Gordon's basement for a short n sweet Body/Head session! They're in EU right now to play a few shows. Very excited about this band and project.

There's been much more exciting things happening.. but this is already a post of epic proportions!